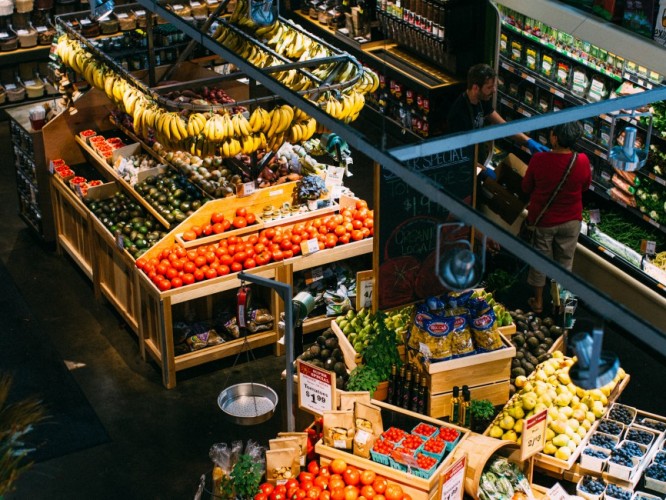 Our General Manager was recently interviewed by the new Buffalo blog YEAH! Buffalo. Check out the great photos and exciting Capital Campaign news:

The day I sat down with Tim Bartlett from the Lexington Cooperative Market was his 18th anniversary of working at the co-op. Tim is the General Manager, and was nominated by BreadHive to be included on this blog. Now, to meet Tim.

“I grew up in East Aurora. My extended family has been farming in Elma since 1820; I have long roots in Western New York. I went to UB and graduated with an english as well as urban planning degree. After college I worked on two organic farms and sold at farmers markets in NYC and 16 different markets in the DC area. I also lived in Chicago for a little while and was part of a housing co-op with about 20 other people. A real fire trap. We made meals for each other along with other things. When I moved back to Buffalo, I started working at the North Buffalo co-op over on Main Street. I started as a cashier, produce worker, I eventually did most of the jobs there, including some management positions. In 1997, the North Buffalo co-op wasn’t doing well, and I kept looking at Lexington and thinking that it’s a really thriving co-op and community of owners who seem to really be invested in their co-op. That seemed really appealing. I applied for a job and was hired as the grocery manager, and promoted to General Manager the following year. The existing GM was retiring and hired me to replace her.”

Why is the Lexington Co-op working out better than the North Buffalo Co-op did?

“I think that this community has always been one that has had community based entrepreneurialism. The idea that it’s not just one person starting something. It’s the community coming together to start something. I think that it gets expressed in the Elmwood Festival of the Arts, which is 90% volunteer run. And the garden walk. The co-op is part of that. It’s a bunch of people who got together in 1971 and said “we want access to good food, let’s get together and start a business to give us that access”. It has just had a series of really engaged and committed owners, from 1971 to today.”

Any fears with opening the co-op in North Buffalo?

“About 10% of our membership comes from that neighborhood. This store and this concept is very well supported by that community. We’re excited to have a store there, within walking distance to many people who already shop with us. We’re willing to take big risks as long as it will do a better job of meeting our owners’ needs. The project to build the current store was a $3.5 million project when we had under $2 million in sales, but we knew that if we could make it through those first few challenging years, we were pretty confident that it would be a wild success because we had so many committed member owners in the neighborhood and so far so good.”

How is the community stepping up for the co-op?

“When we moved to Elmwood, we raised $560k from our owners in unsecured member loans. We told people flat out that if we go out of business, you’re never going to see this money again. 200 people came forward with the money. It was the second biggest funding drive in the history of co-ops across the US. Now, when we go to Hertel, we asked for 2 million (currently at $1.9 million). If we can raise the 2 million, it will be in the top 10 investment campaigns among food co-ops in the US. It’s pretty exciting that this town, one of the poorest cities in the country, just has a commitment to cooperation and this organization that they’re willing to invest a phenomenal amount of money. Our investments range from $2,000 to $50,000. There’s no one person that is funding the whole campaign. It’s really a grassroots campaign. This has been a store that people have invested in throughout it’s history.” Learn more about the campaign here.

Is there anything that motivates you personally? You’ve been here 18 years!

“The values of this co-op are really important to me. When I first started, it was written in the mission statement: ‘nurturing the local economy and enviroment’. Since that concept, that value has morphed into what we think of as our Big Direction, which is our long range vision and plan for the co-op. It is our intention to have a thriving co-op in every community that wants one by 2050. And so, we think co-ops are better for Western New York, it’s a better way of doing business, so we want to build more co-ops throughout Western New York. Part of that is to build a world that better aligns with our values, as expressed in our Big Direction:

To me, the one that really is the most personally motivating, and always has been, is the idea of more local and sustainable food. My family has been farming in this area since 1820 and within my lifetime it is already not a working farm and will likely be sold off to a development. Only 7% of the world’s soil is considered prime for growing. We have some of that soil right here in Western New York and we’re developing houses on it. It’s just insane that in a time when people are going hungry that we aren’t using every ounce of prime soil to grow on. And so, creating a market for local farmers and creating access to local food for people who live here is something that is really exciting to me. I also just like being the grocer. I like the daily rhythms of rolling out the carpets, stocking the milk, seeing Mrs. Johnson and helping her buy her kale. I really enjoy the work and we have such fun customers and staff to work with every day, coming here is a real pleasure. Because we are community owned, our customers walk in like they really own the place, and they hold us accountable for it. They also give us a ton of praise when we do a good job in meeting their needs. Staff who come here from the conventional grocery markets tend to find that our customers tell us nice things way more often than they criticize us.”

How much local produce and products do you sell?

“About 20% of what we sold last year was locally produced or grown. In season, 30% – 40% of our product is locally produced. In the winter that goes down, but in the summer we have a significant amount of local products.”

What would surprise people about the co-op?

“So much of our business comes from word-of-mouth advertising. I always think that it’s because we are a cooperative. Nobody really writes articles in the business section about cooperatives, there’s no business school that teaches you how to run a cooperative, except in Canada. But, it is one of the most prevalent business structures in the United States. As many people are shareholders in cooperatives as there are shareholders in the stock market, but it’s not really talked about as a business model anywhere. Sometimes I think that the word co-op is assigned connotations and stereotypes. Anytime you stake yourself as a community, people outside of that community wonder if they are allowed in and are allowed to be a member. I think that people that have never heard of us, or avoided us, are shocked to learn how nice it is and how friendly we are. Also, 56 cents of every dollar was returned to the local economy from the co-op last year. Most grocery stores return 18 cents into the local economy. That’s more than 3 times as much. People are pretty surprised by that.”

What about Buffalo makes this work?

“Buffalo is a wonderful place to live because it is very community oriented. It’s a very traditional community. We are more willing and apt to shop at a local business where we know the owners and they live in our community, than some big chain. I think that’s a wonderful thing about Buffalo.”

What is the Co-op’s greatest area of need?

“We’d love to raise another half a million for the new Hertel store. We just need more people to believe in the power of cooperation, community and collaboration. Urban Roots started 5 or 6 years ago as the first community owned garden center in the United States, BreadHive just started a year and a half ago. We also have two of the largest cooperatives in the country centered in Western New York. I just think that this is such fertile ground. People think of working together here in a way that just doesn’t happen in other places. We want to see that grow and expand and it’s one of the great things about Western New York. We want to see more people have access to it.”

Anything the community can do to step up and help?

“Just come check us out. Stop in and see if the store meets your needs. We have over 12,000 owners, which is 1.2% of Erie County, which is pretty cool. But we’re always looking for more people to check us out and shop here. If it works for you, that’s great.”

What would you tell a younger version of yourself?

“You’re on the right track and you’re going to love it. When I was young, I was much more restless in thinking that I should be, or wanted to be doing something else. I don’t think that I knew just how much I would enjoy being a grocer. All of the mistakes that I made led me here.”

Our Expansion to Hertel Ave

In February 2015, Lexington announced plans to open a second store in North Buffalo! This exciting expansion for another store moves us closer to our B.I.G. Direction goals. Our 1678 Hertel location will offer:

The store is expected to open in 2017. Stay tuned here for updates!

Our Shared Vision For Expansion

In early 2011, our Board of Directors committed to doubling the size of the Co-op. After study, reflection, and engagement with owners, our final Shared Vision for Expansion emerged. Lexington will double its impact by 2050 by creating: