A Tribute to Dorothy Shaw, Founding Member of the Lexington Co-op 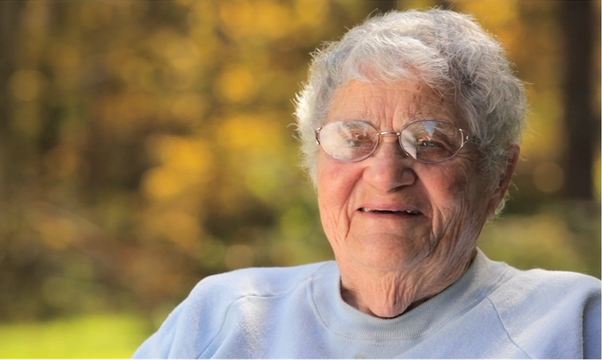 As the new Marketing Manager at the Lexington Co-op, I’ve learned a lot this year and also met a lot of new people. The most memorable of whom was Dorothy Shaw, the 103 year-old founding member of the Lexington Co-op. Never in my life have I ever taken a customer service call that ended in making plans for lunch – but that is exactly what happened when Dorothy called me a few months back.

Tim and I met up with her at the The Place on Lexington Ave, right across the street from the original co-op, and a stone’s throw from her house on Ashland Avenue. Everyone in the restaurant knew her and her order, and was happy to see her. We hugged, got acquainted, and shared a meal while she told us stories of her life and our community over the decades. I am so grateful to have had this time with her, because earlier this month, Dorothy passed away peacefully in her home. Below, I would like to share words of tribute from her dear friend Hope, and from Tim on behalf of the co-op.

“I was watching those hippies from my porch and decided to go see what they were doing,” answered Dorothy Shaw when I asked how she joined the Co-op.  I was a newly minted member of the “cheesecutter’s collective,” and Dorothy enthusiastically showed me the intricacies of cutting, wrapping and sealing. “When we’re done, we get to eat all the scraps – I LOVE cheese!”

She was that fascinating elderly founder in the co-op anniversary videos; perhaps you met her at the store or counted her a friend.  Dorothy was born out of her time 103 years ago, forging a career in the new field of physical therapy and later teaching it at UB, hand-building her rural dream house, raising goats (yup, made and gifted goat cheese) and was never without at least one beloved dog.  Always busy, Dorothy drove for Canopy of Neighbors until age 103 when she reluctantly relinquished driving.

“I want to be useful, and never be a burden.”  Stubbornly independent, Dorothy always did for others, but found it difficult to accept the smallest favor. Her often prickly exterior poorly hid a loving heart; her early 20th century values matched with an adventurous ever-learning spirit was uniquely inspiring.

“I am so lucky, so grateful for my friends, so happy to be here,” were some of her last words.  On December 4th, Dorothy died in the Ashland Avenue home she lived in as a child.  I know I speak for not just myself when I say we are so lucky, so happy and so grateful to have known her. – Hope Hoetzer-Cook

Dorothy was a force within the co-op throughout its history – as cheese cutter, star of two co-op anniversary films and every day insister on high standards.

We honor the co-op leaders who came before.  Who created the co-op, shepherded it and gave it the energy and love they had.  Who took from the co-op food and connections and friendships that made their lives richer.  The co-op is a part of the community; no greater or lesser than the owners, staff and vendors who invest in it and help it succeed.  It is made stronger by their passion and their participation.  We are grateful to be its stewards today, and feel the importance of the asset that has been passed to us and that we will pass to the next generation of co-operators.  Daily, we strive to live up to the intensity, investment, accountability and vision of founders like Dorothy.

Rest in peace, rest in power Dorothy.  We miss you already. – Tim Bartlett