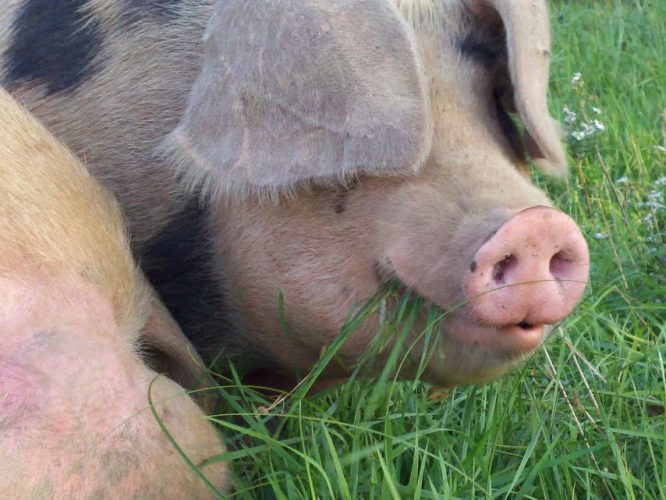 Just over a decade ago, Rich Tilyou began raising heritage hogs on his land in Lockport, NY. Focusing on providing quality pork became more than a hobby to Rich and his family, but a passion. Unfortunately, due to health problems Rich has had to retire from farming. Unable to care for the hogs, Rich decided to look for a place for the pigs he worked so hard to raise the right way. That is when he was hooked up by a mutual friend with Jeff Jendrowski, of Kindred Kreek Farm- a farm owner who was committed to animal welfare and quality meats. Rich sold his pigs to Jeff and now here we are!

The Co-op is excited to offer quality, pasture-raised, heritage pork from Kindred Kreek going forward. Though we are sad to see the closing of T-Meadow Farm, we are excited to work with another LOCAL family farm and help continue the tradition that T-Meadow began years ago.

Will the cuts of pork change?

No! The cuts of meat will be processed the same way and delivered to the stores frozen.

WIll the price change?

No! Kindred Kreek has agreed to sell the pork to us at the same price.

Will the taste change?

No! The hogs are the same and the bloodline of future hogs will be the same- they are just being raised on a different pasture.

When will the switch take place?

It is already in progress! We currently have all the remaining T-Meadow pork on our shelves. As this sells out we will be re-stocking with Kindred Kreek.

In 2005 the Jendrowski family began their small alpaca farm in the small town of Newstead, New York. The land had been farmed since the late 1830’s and been in the Jendrowski family for three generations. As consumer need grew, so did the farm. They family expanded beyond alpacas and added pigs, cows, sheep, goats, poultry, rabbits, and horses. Through the expansion the family’s farming philosophy remained the same- maintain a clean, happy, and safe living environment through a focus on health and quality of life for all of the animals.

Kindred Kreek does not use growth hormones or antibiotics in any of their herds. All of the animals are raised on pastures with a steady diet of grains and hay grown right on the farm.

These practices are some of the many reasons that when Rich Tilyou of T-Meadow farm decided to retire, he sold his stock to Kindred Kreek. He knew that the heritage pigs he spend more than a decade raising would go to a farm that embodied the same values that brought T-Meadow to life years ago. With a promise to maintain the herd and quality genetics of T-Meadows pigs Kindred Kreek will now be the local pork provider for the Co-op!

More About This Switch

Buffalo Spree published an online article which saluted Rich Tilyou’s farming practices and detailed the factors that went into the sale to Kindred Kreek. The article is written with a strong spirit of transparency, which is valued by the Co-op during this switch! Read the article. (Look out! Photos in this article may be disturbing)

We want to know! Email  caitlin@lexington.coop