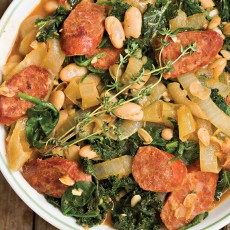 A downright classy bunch of legumes. White beans are creamy, nutritious and versatile. They pair well with tomatoes and Italian flavors, or lemon and herbs. They’ll provide a great base for soups or gratins, and add protein to pasta.  As with most legumes, there are scores of varieties of white beans – the four most popular are available canned and in bulk bins at the co-op!

Cannellini beans Known as white kidney beans, cannellinis are plump with mild flavor and ultra-creamy texture. Possibly the most common white bean, use it in any white bean recipe.

Great Northern beans Smaller than cannellinis, dense and more toothsome than other varieties. Use interchangeably with navy or cannellinis. Great Northerns are popular in French cassoulets.

Navy beans The smallest white beans, ultra-creamy and quick cooking. Often used in baked beans and soups. They’re named ‘navy’ because they were once included in the official U.S. Naval diet!

Baby lima beans Not to be confused with the large lima beans, baby limas are the same wide, thin shape, but are roughly ¾” long. Mellow in flavor, and great in long-cooking recipes like stews for a smooth, dense texture.

What’s your favorite white bean? Any great recipes out there?